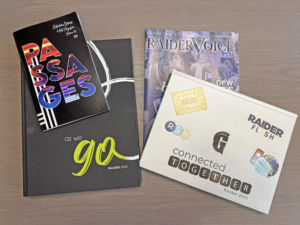 The 2021 editions of the Middle and Upper School yearbooks have both been recognized among the nation’s top scholastic yearbooks as NSPA Pacemaker Award finalists. Just 71 finalists were chosen across the country, and this marks the first time in school history that both divisional publications have earned the nod. Pacemaker finalists will be honored and will receive plaques during the opening ceremony of the JEA/NSPA Spring National High School Journalism Convention on April 7 in Los Angeles, with the winner set to be announced on April 9 at the convention’s awards ceremony.

Additionally, all three 2020-21 Upper School student publications and the 2021 Middle School yearbook have been selected as Crown Award winners – the highest recognition given by CSPA to a student print or digital medium for overall excellence. Gold and Silver Crowns will be announced and presented at the CSPA ceremonies in March 2022.

The 2021 Middle School yearbook, “Connected Together,” won the program’s first Crown Award with its innovative horizontal design. The book was a true representation of the 2020-21 academic year, including a myGulliver portal log-in image as the inside back cover and a keyboard as page one to simulate a laptop, and Zoom-themed class pages. The Middle School Digital Mass Media Program is spearheaded by Cristina Salup, Digital Mass Media Media Program Faculty & Department Chair.