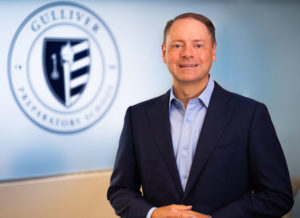 As you browse the pages of this website and learn more about Gulliver Prep, you will see many examples of the incredible achievements of our students. What is most impressive is the sheer magnitude of the variety of ways in which our students excel.

Our mission is to create an academic community devoted to educational excellence, with a personal touch, that fulfills each student’s potential. Every child brings to us, and the world, a unique potential that is all his or her own. Our strength as a school is helping every student identify, cultivate, and ultimately fulfill their unique potential by knowing and caring for each child and through offering an amazing breadth of academic, co-curricular, and extra-curricular opportunities. This is what makes Gulliver truly UNPARALLELED!

We introduce students to new experiences, ideas, worldviews, and possibilities. Whether your child is passionate about the environment, interested in taking a musical talent to the highest levels, captivated by history, committed to developing athletic talent, curious about the fields of architecture, marine biology, or biomedical science, ready to dive deep into robotics and engineering, or thinking about a new business plan or app development, Gulliver offers opportunities to explore these and many other interests.

I encourage you to continue browsing, and reach out to learn more.

Since his arrival on campus in January 2018, Mr. Kling has focused on planning and implementing major facilities projects; enhancing and elevating marketing, communications and fundraising efforts; and deepening the school’s community, corporate, and foundation relations.

He has worked alongside the Board of Trustees, administration, faculty, and staff to chart Gulliver’s future through the development of a new comprehensive strategic vision and plan, and simultaneously, led a significant endeavor to articulate and define the unique strengths of Gulliver through a clear brand expression. The brand expression, launched in May 2020, includes long-standing core values that have been newly defined, a new school crest, and an aligned, unifying single school name – Gulliver Preparatory School.

Mr. Kling has played an integral role in successfully negotiating and completing a historic land-swap transaction with Crossbridge Church making possible a unified, comprehensive master plan for the Upper School Campus. Working with our campus neighbors, the broader community, and public officials, he successfully led Gulliver’s efforts for municipal approval of our master plans for the Marian C. Krutulis PK-8 Campus and Upper School Campus. The master plan projects include aesthetic improvements and upgrades, renovations, and the first significant new building to be constructed is a 61,000 square-foot building at the PK-8 Campus which includes a multi-purpose gymnasium/auditorium, performing arts spaces, classrooms, flexible science labs, and an expansive dining hall.

Prior to joining Gulliver, Mr. Kling served as President of Jackson Academy, Mississippi’s largest independent school. In 17 years at Jackson Academy, first as Chief Financial Officer and General Counsel, and then as President, he led the school’s progressive education efforts, oversaw the doubling of the size of its campus, and raised record amounts for its annual fund.

Holding both a Juris Doctor degree and CPA designation, Mr. Kling is a graduate of Georgetown University and the University of Mississippi School of Law. He is an active Board member of the Florida Council of Independent Schools (FCIS) and has served as a Visiting Accreditation Team Chair for both FCIS and the Southern Association of Independent Schools (SAIS). Mr. Kling has received numerous academic and professional recognitions, including being named a Georgetown University John Carroll Scholar and a James O. Eastland Scholar in Law at University of Mississippi. He is a member of the prestigious academic societies Phi Kappa Phi and Beta Gamma Sigma, and is a proud Eagle Scout. Mr. Kling and his wife, Heather, have two daughters, ages 14 and 18.

Want to get in touch?

Milestones are specific initiatives set that help to achieve our strategic plan goals. Examples of completed milestones in this goal include designing and implementing a capital campaign, increasing giving participation, and creating athletic sponsorship opportunities.

The Ensure Our Future goal incorporates the themes of building a culture of philanthropy and learning spaces. These themes will assist in funding our facility improvements and enhancing our programmatic offerings.

Milestones are specific initiatives set that help to achieve our strategic plan goals. Examples of completed milestones in this goal include increasing funding and or services to meet the needs of non-traditional students, establishing of a new employee mentoring program, developing an outdoor multi-day orientation for all incoming 9th grade students, and changing the communication process so that the Gulliver difference is portrayed effectively through storytelling.

The Empower Our Students goal incorporates the themes of grading and placement, social and emotional learning, character education, and expanding student leadership. Each effort expands on the development of building student agency, well-being, leadership, and character.

Milestones are specific initiatives set that help to achieve our strategic plan goals. Examples of completed milestones in this goal include proposing new ways for students to demonstrate proficiency of standards and mastery, creating opportunities for affinity groups to meet in “open spaces”, suggesting new character education policies to help promote and support student responsibility, and launching a peer tutoring program in the Upper School to improve skills taught in classes.

The Unite Our Community goal incorporates the themes of curriculum development, professional development, and progress monitoring. Each theme builds on the belief that a shared mission and vision can strengthen and align our community

Milestones are specific initiatives set that help to achieve our strategic plan goals. Examples of completed milestones in this goal include increasing opportunities for faculty to meet with library personnel around the research policy, developing a digital source of professional development webinars, and proposing updates to the current systems that help identify students with academic needs.

Applications for the 2023-24 school year will be available on September 1. If you are interested in the 2022-23 school year, please contact our office at admissions@gulliverprep.org and a member of our team will reach out to you. We look forward to connecting with you soon!

Math Workshop is a framework that allows students to learn new math content each day, practice math strategies in a variety of ways, and reflect on learning through verbal or written sharing. The predictable structure of the math workshop makes it easier for students to participate in differentiated activities.

Units throughout the year include:

The program in the Primary School provides the foundation for the robust English language arts curriculum at Gulliver, and supports students as they develop into confident readers, researchers, and efficient writers across all content areas.

Students develop their voice during Writing Workshop as they learn the writing process, including generating ideas, drafting, revising, editing, and publishing. Writing Workshop begins with a mini-lesson, is followed by independent writing time, and concludes with sharing of student work. In SK, students begin by drawing pictures to tell stories, labeling the picture, and then writing words to describe the pictures. Students are encouraged to write the sounds they hear in words, as well as include sight words that are posted in the classroom.

Units throughout the year include:

Handwriting is taught using the Handwriting Without Tears program. Students develop their skills over time, focusing first on how to hold instruments properly, and then on size and spacing in order to form letters and write with ease. The curriculum uses hands-on, multisensory materials and was designed in such a way that it introduces shapes, numbers, and letters in an order that matches the progression of children’s developmental abilities so that it is easier for them to practice, learn, and remember. The program follows research of how children learn best and includes materials that address all styles of learning.

A mathematical foundation is established in PK and JK with interactive games, puzzles, block building, and manipulatives. Our morning meeting begins by reviewing the calendar and daily schedule, incorporating the gradual understanding of time, counting, and numeral recognition. Throughout these activities, children develop an understanding of numerals, shapes, patterns, measurement, sorting, one-to-one correspondence, categorizing, and logical thinking. Various manipulatives aid students in developing mathematical problem-solving skills as they count, sort, combine, and measure with pattern blocks, counters, and tangrams.

Emergent literacy for PK and JK is integrated throughout our curriculum. Our print-rich environment helps children understand why and how print is used. Nursery rhymes and songs allow the children to hear the sounds of speech in our oral language. Active engagement with books and storytelling promote pre-literacy skills that build vocabulary, develop comprehension, and support higher levels of thinking. Over time, children learn to express their thoughts, feelings, and experiences through drawing and writing.

Students in every grade spend the first six weeks of school understanding their role and learning how to be a positive member of their class and school community. Each class develops classroom expectations and discusses how to work together and problem solve when challenges arise, in alignment with the Responsive Classroom approach.

Every grade learns about various communities and the important role that the people, places and history play as they develop and change over time.

Through a project-based approach, students share and learn about themselves, their families, school, local, national and global communities. Performances, field trips, and real-life simulations support students’ growth throughout their units of study.